Č. Budějovice - Slavia
Goals: 1., 26. a 64. Tecl, 5. Bořil, 58. Masopust, 86. Holeš
Radio
Slavia started the 2020/21 league season with an impressive 6-0 win over České Budějovice. Stanislav Tecl completed hat-trick in the second half.
The red and whites started with 4-1-4-1 tactical with Stanislav Tecl as a lone striker. Centre-back David Hovorka returned to the starting line-up after 10 months as he fully recovered from his knee injury.

And Slavia managed to opene the score of the new season just 45 seconds into the game. Vladimír Coufal sent nice long pass to Stanislav Tecl and our striker sent the ball along Drobný into the net.

Just 4 minutes later captain Jan Bořil doubled Slavia lead. Stanciu’s cross from the corner was prolonged by Tecl inside the box and Bořil could fire it into an open net on the far post.

In 12th minute Bodějovice got into their first chance. Šulc passed the ball to Jánošík inside the box and his low shot had to be stopped by Kolář. In 23rd minute Bořil latched onto a through pass on the left side of the box, but Drobný managed to block his backward pass.

Slavia added their third after 26 minutes. The red and whites won the ball on their own half, Stanciu’s long pass found Stanislav Tecl behind the home defence and our striker added his second of the night with slight deflection from one of the home defenders.

Both teams created one more big chance till the end of the opening half. Skovajsa was denied by Kolář with his firm shot from the edge of the box, Bořil missed close with his header on the other side.

After the break it was Slavia who got into the first chance when Stanciu fired from outside the box after a quick counter-attack, but Romanian midfielder missed the right post. Stanislav Tecl fired just seconds later, but Drobný blocked his shot with a good save.

But it was Lukáš Masopust who opened the score of the second half in 58th minute. Stanciu sent his through pass to Tecl, his effort was blocked by Drobný, but Masopust got the ball and sent it into an open net.

After 64 minutes Stanislav Tecl completed his hat-trick to make it 5-0 after a header following firm pass by Ševčík. It was the first hat-trick for our striker since October 2014 when he scored all three goals for Viktoria Plzeň in Mladá Boleslav.

In 75th minute Budějovice got into their biggest chance of the second half, but Valenta fired only into the gloves of Ondřej Kolář. However, it was Slavia who said the last word. Four minutes before the final whistle Drobný blocked Olayinka’s shot and Tomáš Holeš fired the ball over the lying goalkeeper under the crossbar.

The red and whites thus started the 2020/21 league season with an impressive 6-0 win away in České Budějovice. Next round we return home to Eden to play with Příbram. 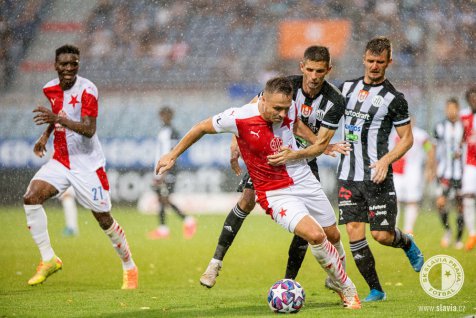 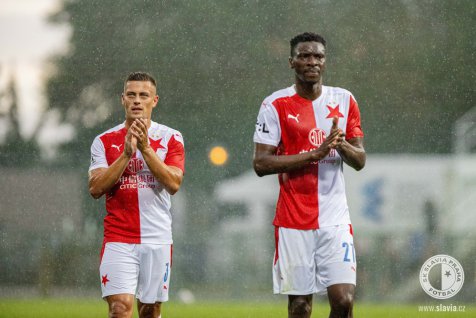 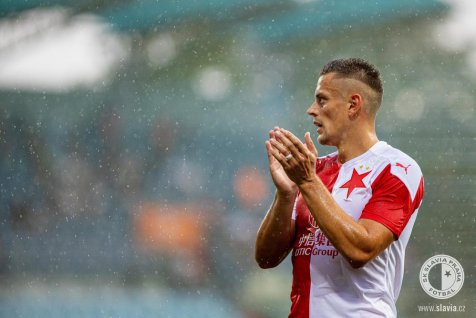 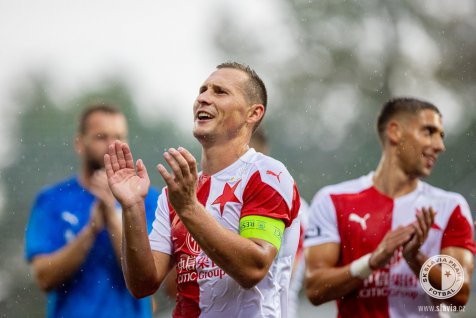 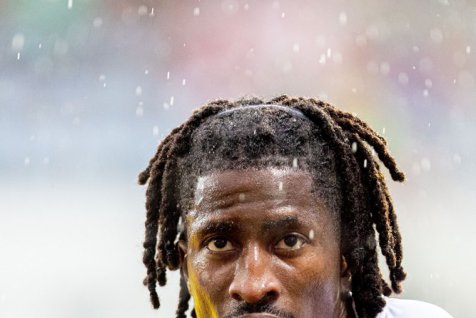 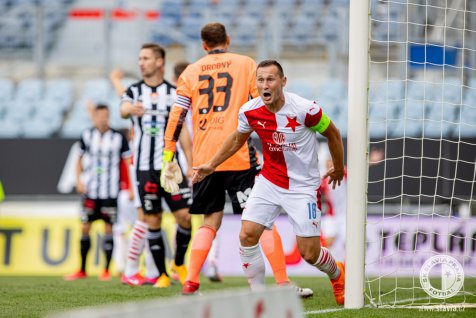