close
CZ CN
Slavia Museum on Sinobo Stadium is open to public on Wednesday and Thursday, 13 and 14 February. Discover more than 125 years long history of the oldest Czech sports club in the biggest Czech football museum!
On Wednesday and Thursday, 12 and 13 February, the Slavia Museum is opened to public. Belgian fans travelling for Europa League game between Slavia and Genk can visit the Museum during these days. With ticket for the match they will get discount on Slavia Museum tickets as well!

Entrance Fee: 150 CZK, discount 20% with match ticket.
Tickets can be purchased on the stadium cash desk. We accept Czech Crowns and credit cards.

The exhibition located inside of Sinobo Stadium will guide you through the entire history of Slavia football club from its origins in 1982, through famous 1920s, 30s and 40s, dark times of repressions under communist rule, up to current titles, Czech cup victories and European games.

Slavia Museum is a unique project in the Czech football world. The 2-storey museum has floor space of more than 1.200 square meters and houses more than thousand artefacts such as historical shirts, famous trophies, books or unique photos.

There are many notable shirts from Slavia history on display (José Antonio Camacho from the game between Slavia and Real Madrid, Klaas-Jan Huntelaar and Thomas Vermaelen from famous UCL qualifier between Slavia and Ajax, Vladimír Šmicer Liverpool shirt from 2005 Champions League Final with AC Milan or formes Slavia and Zenit St. Petersburg captain Miguel Danny´s shirt.

Signed Juventus shirts by Cristiano Ronaldo and Pavel Nedvěd donated by former captain of Czech national team and current Juventus manager himself are part of the exhibition as well together with original ball signed by Brazilian star Pelé.
zavřít

Slavia won 1-0 away at FK Mladá Boleslav, Petr Ševčík scored the only goal of the game.
More 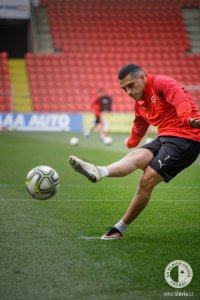