Slavia - Ostrava
Goals: 18. Škoda, 70. Masopust, 90. Frydrych, 90. van Buren
Radio
Despite 7 changes in the starting 11 in compare to Sevilla game Slavia recorded another big win 4-0 against Baník Ostrava. The red-whites are 6 points ahead of Viktoria on top of the league again!
5th consecutive home game without conceded goal for Slavia.

Slavia 6 points ahead of Plzeň again.

Slavia started with 7 changes in compare to Europa league game in Sevilla on Thursday. Milan Škoda returned as lone striker, Hušbauer, Olayinka and Baluta started in midfield and Frydrych, Ngadeu and Zelený in defence. Goalkeeper Kolář, Stoch and Souček in midfield and Kúdela in defence were the only ones to remain for both games.

The red-whites started – as usual at home – better than their opponents and it was eventually only them who created chances in the first half. Just 7 minutes into the game Frydrych headed the ball wide in good position after Stoch’s corner.

On 17th minute Slavia opened the score. Olayinka fired after another corner, Frydrych deflected the ball and Laštůvka managed to punch it just in front of himself and Milan Škoda found the back of the net with his rebound.

Slavia could add another just 5 minutes later, but Zelený missed the far post with nice cross shot, on 28th minute Laštůvka managed to block Stoch’s attempt with some decent save.

After 51 minutes Slavia got big chance to double their lead. Olayinka was faster on ball than Baník goalkeeper Laštůvka who knocked him now triggering penalty for the red-whites, but Miroslav Stoch was denied by Laštůvka with an effort on his right hand.

The home side thus added second after 70 minutes. Stoch sent a long cross on the right wing and Frydrych passed the ball to Lukáš Masopust, who fired his volley through Laštůvka. It was less than a minute after Masopust came on the pitch.

Baník couldn’t create any chances even after the second goal and Slavia could add third at minute 82 by another substitute Mick van Buren, but the Dutch striker missed close from 10 meters after a nice pass by Hušbauer.

The only chance for Baník to score came after 85 minutes when Procházka headed the ball wide following a corner kick. Two minutes later van Buren was passing the ball to Masopust in front of an open net, but their opportunity was interrupted by an offside. On 88th minute Hušbauer missed the right post close and just a minute later van Buren was denied by Laštůvka again.

The red-whites however added two more in 7-minutes-long added time. After several promising chances Hušbauer sent his cross from corner kick precisely on Michal Frydrych’s head and former Baník player found the back of the net.

Three minutes later after a nice combination Frydrych passed the ball in front of the goal to Mick van Buren and the Dutch forward scored fourth goal of the night.

Slavia thus recorded third consecutive big win in the Czech FORTUNA:LIGA (4-0 home against Slovácko, 3-0 at Bohemians and 4-0 against Baník) and is 6 points ahead of Viktoria Plzeň on top of the league again! 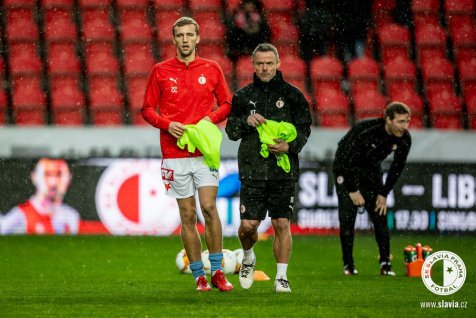 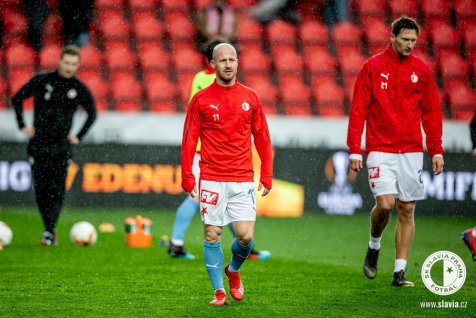 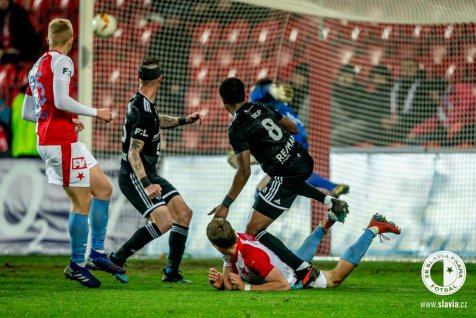 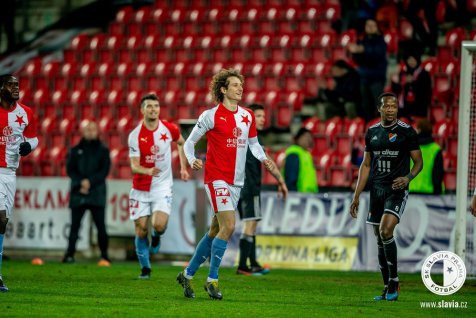 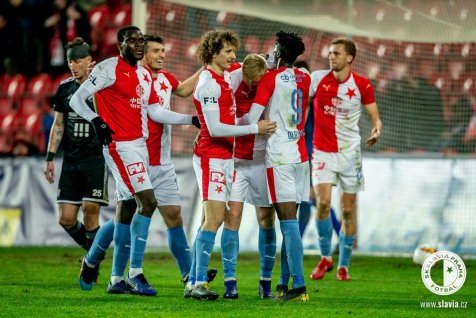 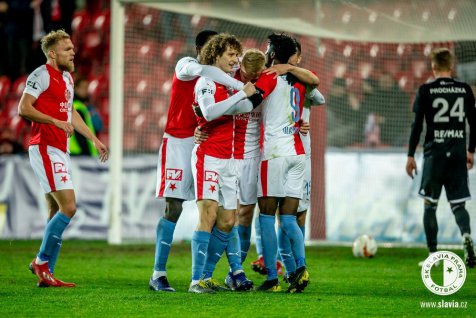