Slavia - Plzeň
Goals: 81. Masopust, 87. Souček (pen.), 89. Traoré - 90. Kovařík
Radio
The Red-Whites secured important 3 points in a dramatic finish and increased their lead in the league table!
For the second match of the additional final stage of FORTUNA:LIGA against Pilsen head coach Jindřich Trpišovsky picked the same exact starting XI that faced Liberec in the previous game.
Fantastic atmosphere from the red-white stands helped Slavia players in putting enormous pressure on Pilsen defense right from the start. Peter Olayinka was the first one to create an interesting opportunity after physically out-battling the opposite defender. However, Pilsen’s Hruška was quick to come forward and denied the Nigerian’s shot.
Just a few minutes later Josef Hušbauer’s corner found unmarked Simon Deli in the penalty box. Unfortunately, he only headed the ball into the Hruška’s hands.
Pilsen players rarely created any chances in the first half. The only exception was Hrošovský’s long-distance shot. However, Kolář didn’t have to worry that much as the shot missed the target.
Despite creating some chances and putting pressure on Pilsen, the first half didn’t bring any goals. Thus, the players headed to the dressing room with the goalless score-sheet.
The second half started with no changes in both line-ups and neither the display of the game changed. Slavia was the first to create a goal-scoring opportunity in the second half. Lukáš Masopust ran into the box and intended to find better placed Peter Olayinka on the far post. Despite his best effort, the winger was few centimeters short and couldn’t reach the pass in front of the open goal.
Slavia was nearly punished for the wasting of goal-scoring opportunities in the 63th minute, when Kovařík hit the post and Beauguel missed in great position just a few seconds later.
Jindřich Trpišovský reacted by subbing on captain Milan Škoda followed by Miroslav Stoch and Ibrahim Traoré.
As the time passed, the tension rose on the pitch as well as in the stands. However, to the joy of the home supporters Lukáš Masopust finally broke the deadlock in the 81st minute with a left-foot shot after Jan Bořil’s cross and launched loud celebrations – 1:0!
Whoever thought, that Slavia would eventually focus on defence after the first goal, was hugely mistaken. In the 87th minute, refferee Zelinka didn’t miss Liberský’s handball and awarded a penalty kick for Slavia. Tomáš Souček sent Hruška the wrong way and doubled the lead with coolly converted penalty.
However, the secured win was still not enough for the Red-Whites as they kept on banging on Pilsen goal. In the 89th minute, Miroslav Stoch out-sprinted the opposition defense and as a role-model team player served the pass in front of open goal on a silver platter for better placed Ibrahim Traoré. The Ivory Coast midfielder took the chance and unleashed a low strike that made it 3:0 for Slavia.
Pilsen eventually managed to scored one goal in the extra-time but it in no way spoiled the full-time celebrations after the 3:1 win.
Thanks to the victory against the direct rival in the title race, Slavia increased its lead at the top with three games of the final of FORTUNA:LIGA left to play. 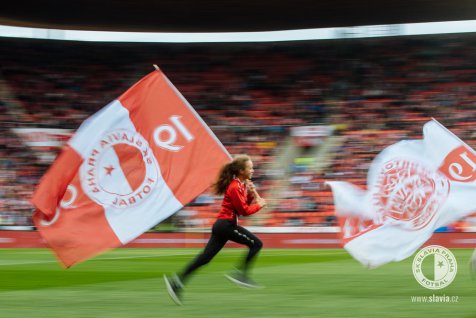 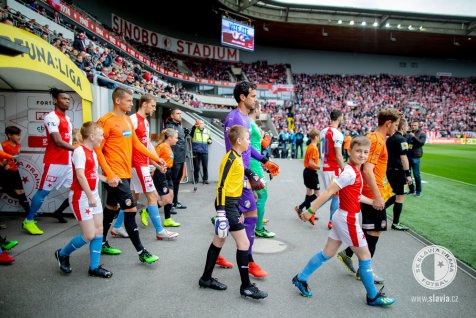 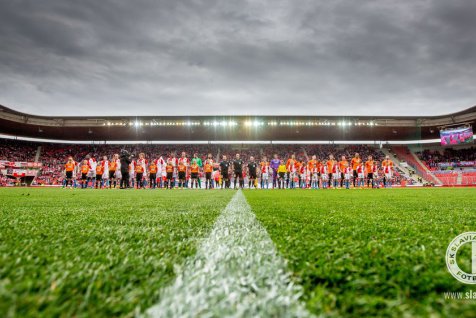 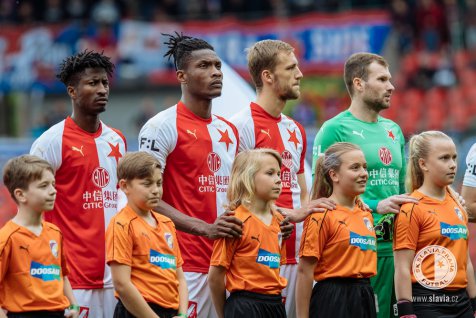 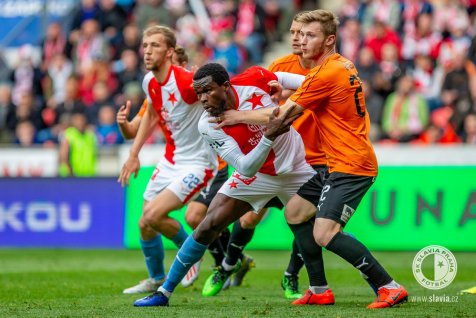 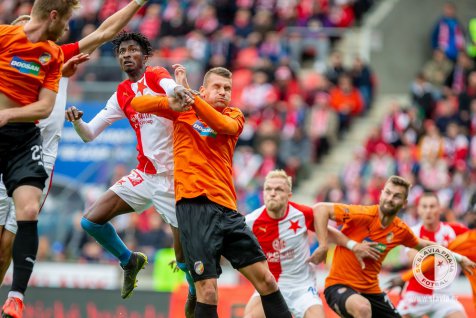