Slavia - Plzeň
Goals: 90. Kúdela (pen.) - 90. Beauguel (pen.)
Radio
Kúdela and Beauguel both scored a stoppage-time penaltiy to secure a draw in what was a direct fight between the league leaders and the runners-up.
Slavia got into the opening chance of the game after 17 minutes when Olayinka passed the ball to Oscar inside of the box, but our left back fired wide from a difficult position. Two minutes later Traoré set up Tecl with a long through pass and our striker went alone on Staněk, the away goalkeeper tackled him, and the referee pointed to the spot. However, after VAR check the penalty was revoked as Staněk managed to block the ball before the contact. With 25 minutes on the clock Tomáš Holeš got a rebounded ball behind Plzeň box and quickly fired with his left foot, but the shot was directed into the middle of the goal and Staněk could make an easy save. Three minutes before the break Peter Olayinka launched a quick counter-attack, at the end of a combination was Ibrahim Traoré who cut inside and sent a low shot on Staněk, but Viktoria goalkeeper managed to kick the ball out. Slavia had 80% possession in the opening half but failed to score against resilient Plzeň despite total dominance and several good opportunities. The second half steted in similar pace and Stanislav Tecl headed wide in a good position just 4 minutes into the game. The rest of the second half was, however, more equal and it took almost 20 minutes before Slavia got into another chance. After Provod’s cross the ball rebounded several times on the far post before it jumped next to the post after the last touch by one of the defenders. Plzeň created chances mostly after set pieces and counter-attacks. In the biggest one after 74 minutes the ball rebounded to Beauguel behind Slavia defence, but his shot from a close range was saved by Mandous. Giant Slavia chance came five minutes into the end after a set piece. Jurásek returned the ball on the far post and Olayinka had enough space to shoot, but his effort was blocked by Pernica. The ball rebounded to Kúdela who fired again from the edge of the box, but his shot was once again blocked by a defender standing on a goal line. However, the referee returned to the situation when Jurásek headed the ball on the far post and the VAR revealed that Beauguel hit him with a high kick shortly before the header. It was penalty for Slavia and Ondřej Kúdela gave us lead when the game moved to the added time. Unfortunately, the match was not over. Shortly after the game restarted, Trusa got the ball on the edge of our box, turned around Oscar who threw him off balance and the situation resulted for another penalty, this time for Viktoria. Beauguel scored despite Mandous guessing the right side and the game thus ended in a draw. With this draw and three games of the league final left Slavia are now second, two points behind Viktoria. 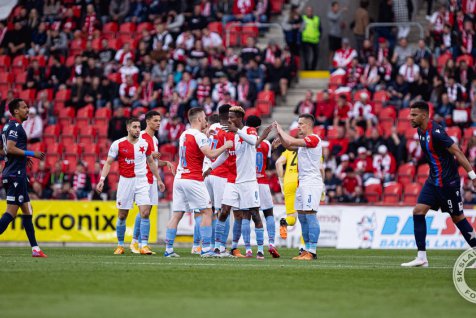 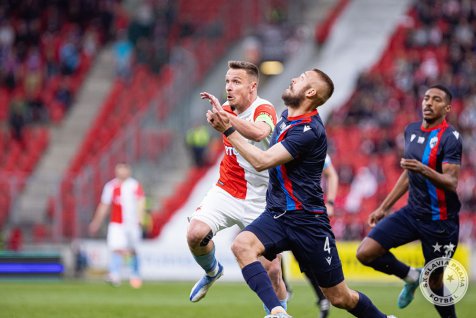 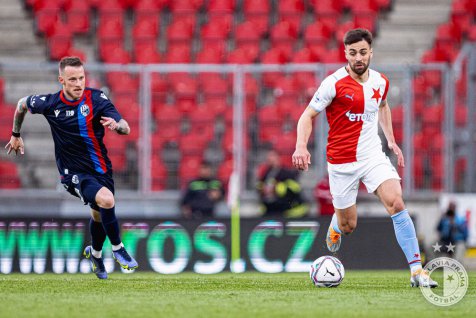 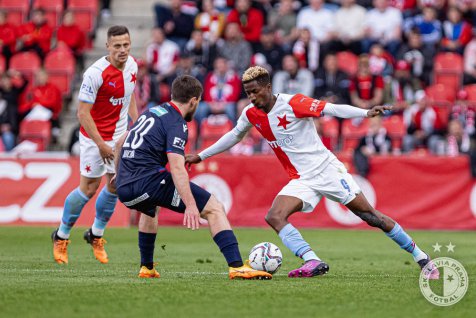 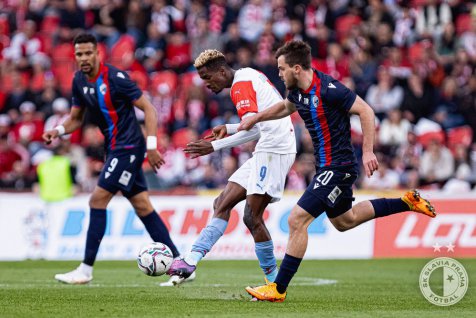 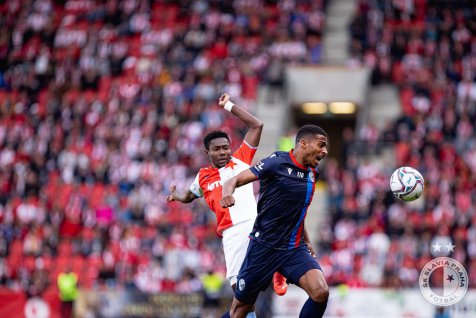