20-year old Nigerian forward joined Slavia on the beginning of 2022. He spent the spring part of 2021/22 season playing for the reserves and helped the team to promotion to the Fortuna National League (2nd division) with 6 goals and 3 assists. He made his maiden appearance for the first team in the last game of the season coming from the bench in the Prague Derby against Sparta.

Before this season he became a regular part of the first team. His important goals against Panathinaikos and Rakow helped Slavia to qualify for the UEFA Europa Conference League group stage. He scored 4 goals in the autumn part of the Fortuna Liga, including a beautiful free kick away at Jablonec.

Slavia played LASK twice in the UECL round of 16 last season and managed to eliminate the Austrian club with 4-1 home win and a narrow 3-4 away defeat. 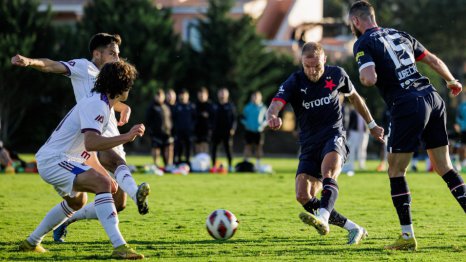 Mick van Buren was the only one on the scoresheet in the second friendly against Geneve. With his strike in the second half he secured a 1-0 win for Slavia.
More