Slavia - Teplice
Goals: 16. Stanciu, 42. Kuchta, 84. Ousou
Radio
Slavia dominated the game against Teplice in the sixteenth round of Fortuna Liga as Stanciu, Kuchta and Ousou scored in a 3-0 home victory.

Slavia started with two changes compared to the Thursday’s game against Feyenoord. Kuchta appeared on the pitch as a lone striker and Schranz moved to the right side. Alexander Bah, who suffered a head injury against Feyenoord, was replaced by Lukáš Masopust and Jakub Hromada started in central midfield in place of Ondřej Lingr.

The Red-Whites started strong and in the 4th minute, Masopust laid the ball out to Holeš who’s shot was deflected for a Slavia corner. Not even a minute later Schranz sent Kuchta running towards the opposition´s keeper and our striker managed to get past the keeper, but his effort was not fast enough and Grigar managed to get his hands on it. With 9 minutes on the clock Holeš sent a through pass to Hromada into a one-on-one with the goalkeeper. Hromada’s shot was blocked by the goalkeeper and the ball was then cleared by one of the defenders. In the 14th minute, Rezek tackled on the edge of Teplice box and Slavia got a free kick from a dangerous position. Nicolae Stanciu stood up to take it and curled the ball into the top right corner. No chance for the goalkeeper and 1-0 to Slavia. Slavia kept pushing for a second but did not manage to create a clear goal-coring chance until just three minutes before half time. Kuchta managed to get his head on Masopust’s cross from the right wing and lifted the ball just enough to get it above and around the keeper making it 2-0 for the Red-Whites. The second half started just as the first with Slavia dominating the field. In the 53rd minute Holeš got hold of the ball near Teplice box and tried his luck from outside of the penalty area, but Grigar made a great save to keep his team in the game. With 59 minutes on the clock Teplice midfielder Lukáš Mareček came in sliding and hit Olayinka with his studs up. The referee originally gave a yellow card, but after a brief consultation with VAR, he came back with a straight red. Teplice went down to ten men with half an hour left to play. With about twenty minutes left in the game, Slavia almost got their third after Ousou’s effort was blocked by a superb Grigar's save and Lingr’s shot from the rebound only marked woodwork. Slavia made their last two substitutions of the game after that as Madsen replaced Hromada and Samek came on for goalscorer Kuchta. With six minutes left until the final whistle, Slavia finally made the most of their chances and managed to get their third goal. Plavšić’s great cross found Aiham Ousou on the far post and our centre back cleverly chipped the ball over Grigar making it 3-0. Slavia defeated Teplice 3:0, making their score from the last three league games 13:0 and securing their first position in the league table. The next game will be played away in Olomouc on 4 December. 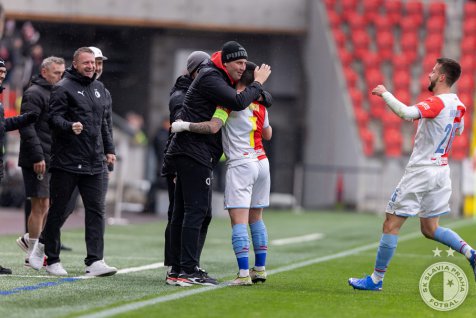 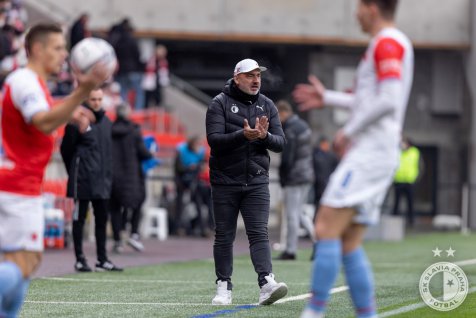 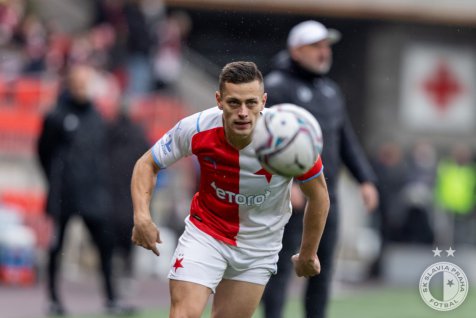 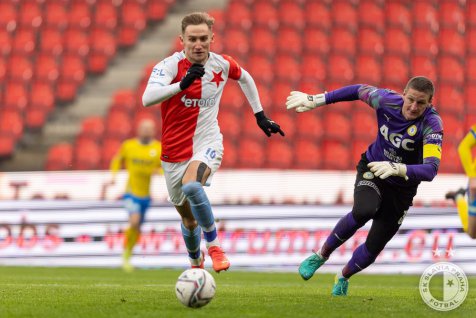 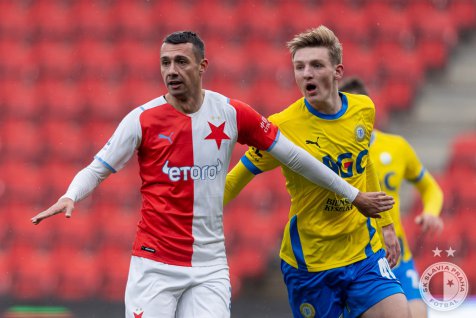 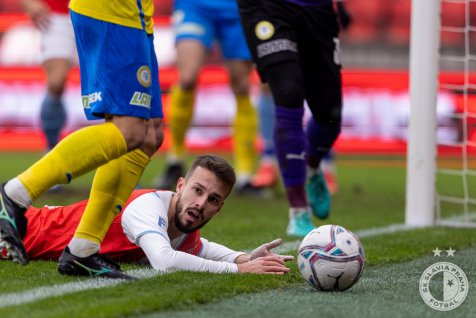