Slavia - Slovácko
Goals: 29. Plavšić, 75. Traoré, 85. Lingr
Radio
Slavia defeated Slovácko 3-0 at home when Plavšić opened the score and Traoré with Lingr followed after the break.
The match started with Jurečka’s chance when Slovácko forward fired wide from behind the box, but it was Slavia who opened the score beautifully with 29 minutes on the clock. Nguyen rushed out of his goal to head the ball away behind the box, Srdjan Plavšić caught the ball some 40 metres from the goal and quickly chipped the goalkeeper to give Slavia lead. Only two minutes later Slavia could double their lead when Yira Sor’s cross hit the crossbar behind Nguyen. After an equal start Slavia started to set the pace of the game and after 40 minutes Sor again got to an acrobatic effort, but the ball missed the left post. With a narrow lead Jindřich Trpišovský decided to make three substitutions at the break. Traoré, Ševčík and Lingr came on the pitch replacing Jurásek, Oscar and Sor. But it was Slovácko who almost equalized after 56 minutes when Mandous had to make a superb save to block Jurečka’s effort from a close range and few seconds later also a rebound by Cicilia. Only a minute later Tecl fired on the other side getting behind Slovácko defence, but the visiting goalkeeper saved his effort into the middle of the goal. In the 63rd minute Ibrahim Traoré appeared in his first chance heading alone inside of the box after Schranz’ cross but Nguyen blocked his header going in the opposite direction with a great reflexive save. Ivorian midfielder had better luck in the 75th minute. Ševčík found him on the near post with a cross from a corner kick and Traoré headed the ball in to give Slavia two-goal cushion. Three minutes later Traoré was at the end of a quick counter-attack, but his cross-shot was blocked by Nguyen. The third Slavia goal came from the air again. Srdjan Plavšić sent a sharp cross from the left wing and Ondřej Lingr found the back of the net with a difficult header. Lingr scored after almost a month, and it was his 14th goal of the season. Slavia dominated the final part of the game and created even more chances, but the 3-0 result stood till the end. With two games remaining, the Red and Whites are second in the league, two points behind Viktoria Plzeň. Slavia travel to Ostrava to play Baník before the last game of the season home against Sparta. 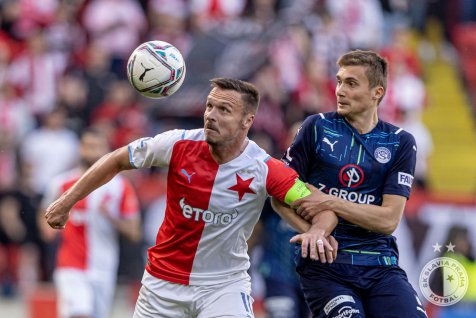 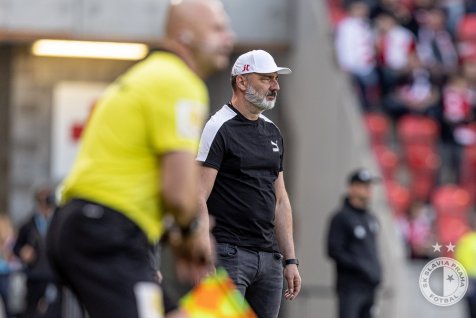 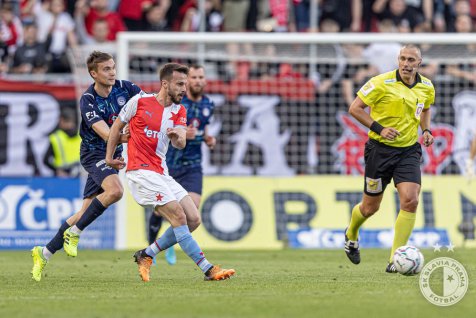 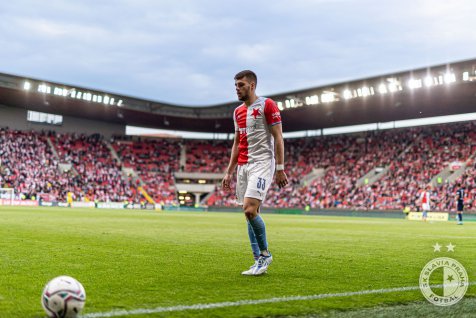 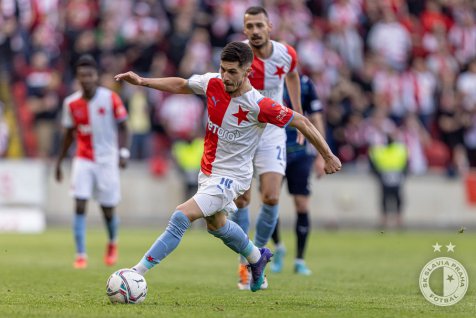 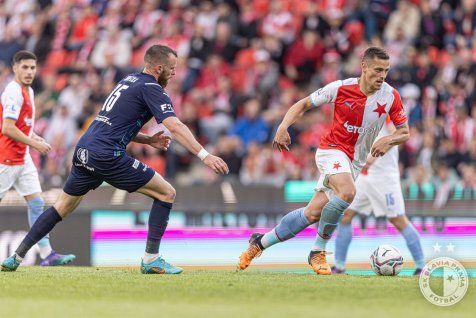