close
CZ CN
Slavia play their first home game of Group F against Borussia Dortmund on Wednesday 2 October with kick-off at 6:55 pm.
The game has been sold-out and there will be no tickets on sale on matchday. Tickets for away sector have been distributed via Borussia. There will be no away tickets available in the stadium box office on matchday.

Gates of Eden Arena open at 4:55 pm, two hours before the kick-off. We strongly recommend coming to the stadium early, at least one hour before the kick off. Otherwise we cannot guarantee you will get to your seat on time for the beginning of the game.
Away sectors 119, 120 and 121 are located between Eastern Stand and František Plánička (South) Stand. They are accessible via separated entrance no. 3 from “Pod Altánem” street (along the railway).

We kindly remind all fans that using any pyrotechnics is strictly prohibited on the stadium territory. So is throwing any object on the pitch. We also remind you that in accordance to Czech law smoking is prohibited inside of the stadium and on the stands. 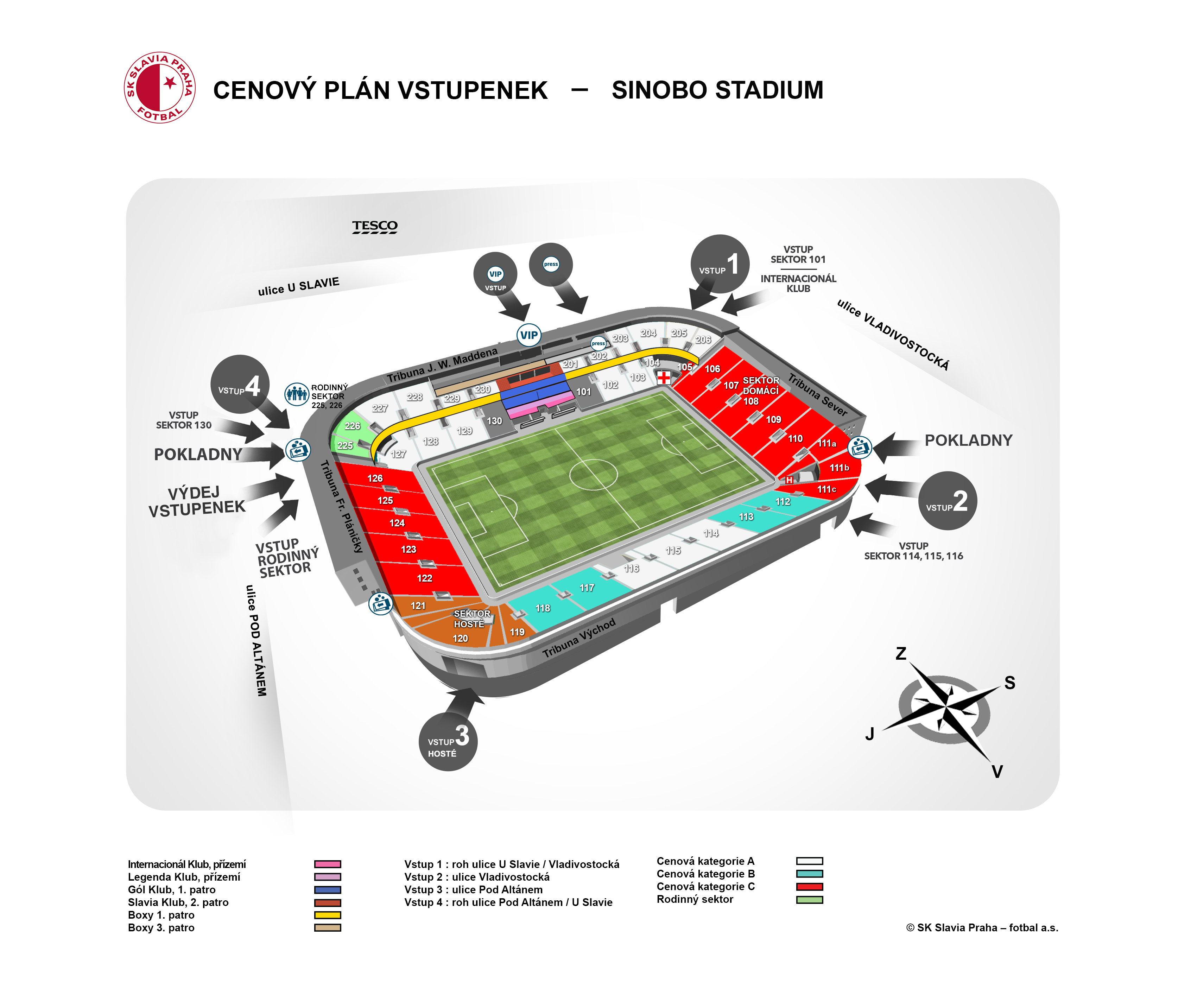 The easiest way to get to Eden on matchday is by public transport. The stadium is located in the neighbourhood of Vršovice (Prague 10) and the way from city centre should take no more than 25 to 30 minutes.

Use Trams no. 6 and 22 from Václavské or Karlovo square, Národní třída or “I. P. Pavlova” metro station (tram no. 22 will have extra timetable with more trains before and after the game). Trams 7 and 24 ftake you to the stadium also from “Karlovo náměstí” metro station. The stadium is located just 2 minutes from the tram stop called “Slavia”.

We do not recommend coming to Eden by car as parking possibilities are limited and traffic use to be heavy before and after the match. If you come early you can park in the Eden Shopping Centre, just across the street from the stadium. Or you can leave your car in P+R parking lots located near metro stations (Skalka or Chodov are the closest).

Slavia Museum will be open from 9 am to 12pm. Tickets can be purchased on the cash desk by entrance 4.

There is variety of food and beverages offered inside the stadium including coffee, sweet pastry, burgers or traditional Czech sausage (klobása). All food stations and stalls accept payment by card. Cards are also accepted in Slavia Fanshop located behind the Northern Stand.

It´s forbidden to enter the stadium with big bags or laptops (purses and other small baggage allowed). In case you cannot leave your bagga at the hotel or at home, you can use the left luggage by the entrance no. 2. It´s open from 4:30 pm and charges 50 CZK (about 2 EUR) for each piece of luggage.
zavřít