The Czech Football Association established the Charity Cup in 1905 with the first match being played a year later. Slavia won their first Charity Cup in 1908 and followed up on that success to win again in 1910, 1911 and 1912.

In the modern era, the red-whites lifted the Czech Cup (then called ČMFS Cup) three times: in 1997, 1999 and 2002. The final in 1997 was played on 15th June at Strahov Stadium which witnessed a small Prague Derby between Slavia and Dukla attended by 8236 spectators. No goal was scored despite the best efforts of both teams and the match went into extra time. František Cipro’s squad managed to win with the following line-up: Stejskal – Hyský (53. Řehák) – Vlček, Kozel, Ašanin – Lasota (100. Pěnička), Ulich, Horváth, Novotný – Vágner (67. Vávra) – Vácha. 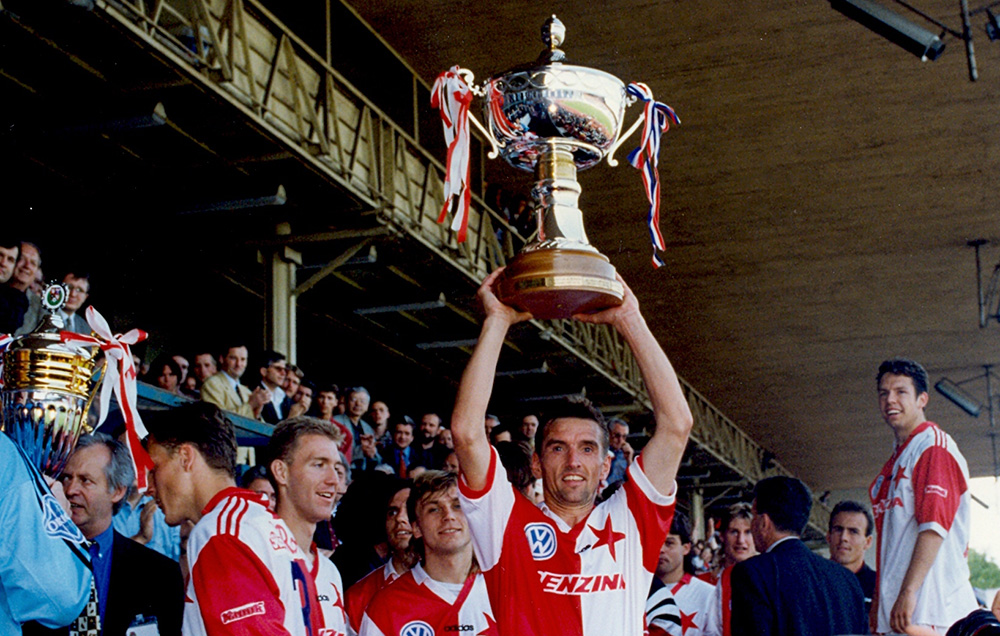 In 1999 Slavia progressed to the final again and faced Slovan Liberec on 25th May. The match also went to extra time and we lifted the cup thanks to the golden goal rule. The coach Jaroslav Hřebík lead the following squad: Černý – Vlček, Rada, Petrouš, Labant – Lerch, Ulich, Horváth, Skála (77. Dostálek) – Zelenka (60. Malár), Vágner.

On 13th May 2002, the Strahov Stadium welcomed 8820 fans for the cup final which was also a Prague Derby against Sparta. Slavia supporters had a reason to cheer when Tomáš Došek found the net from the first dangerous situation. He scored again in the 17th minute. Four minutes later, Sparta’s captain Novotný deflected the ball into our net – 1:2. However that was the last goal of the game and coach Miroslav Beránek and his squad could celebrate: Černý – L. Došek, Šuškavčevič, Petrouš, Skácel – Piták, Dostálek, Gedeon (86. Stibůrek), Kuchař – T. Došek, Kuka (10. Vachoušek).


Nowadays the Czech Cup is called the MOL Cup. It was on 9th May 2018 in Mladá Boleslav when Slavia players finally lifted the domestic cup after a long 16 year wait, defeating Jablonec 3:1. We eliminated Třinec, Jihlava, Liberec and Mladá Boleslav on our way to the final. Stanislav Tecl scored the first two goals of the final, Miroslav Stoch added the third. The line-up for the final: Kolář – Frydrych (90. Kúdela), Jugas, Ngadeu, Bořil – Souček – Stoch (90. Danny), Hušbauer, Sýkora, Zmrhal – Tecl (81. Škoda). Jaroslav Šilhavý was the head coach in the first half of the season and later passed the helm to Jindřich Trpišovský.

On 11th September 1938 Slavia finally won the Central European Cup. In the first round, we eliminated Belgrade 3:2 away and 2:1 in Prague. In the second round, we sensationally swept aside Ambrosiana (today Inter Milan) 9:0 and 3:1. Slavia lost in the first leg of the third round in Genoa 2:4 but managed to turn the game on its head by winning 4:0 at home. Slavia drew 2:2 at home in the first leg of the final with Ferencváros and won away in Budapest 2:0 (Vytlačil, Šimůnek). The winners of the Mitropa Cup are in the picture taken on Sunday 11th September 1938 by Magyár Hírlap. Top row from the left: counsellor of the Czechoslovak Embassy in Hungary Mr. Fíša (a representative of Czechoslovakia in the organizational committee), chairman of the organizational committee signore Coppolla (also Chairman of Italian Football Association) and members of SK Slavia. Václav Valoušek (football chairman in Slavia, head of delegation), Josef Laufer (Slavia international secretary, radio journalist and sports journalist of Czech News Agency), masseur Jiří Heger, Josef Bican, second goalkeeper Alois Bureš, Rudolf Vytlačil, head coach Jan Reichardt, Karel Černý, Ladislav Šimůnek, Aleksa Bokšay, in non-sports clothes: Václav Pechar (Slavia player in 1920 – 1924, in Budapest as team leader) and Václav Bouška who played both legs against Belgrade. Bottom row from the left: Vojta Bradáč, in non-sports clothes Koloman Bobor (former Slavia player in 1927 – 1929 of Hungarian origin, served as an interpreter for the English referee Jewell), Otakar Nožíř, team captain Ferdinand Daučík with the trophy, Vlasta Kopecký, Karel Průcha and Bedřich Vacek.