Origins of the club

Where does our name come from?

“Sláwa”, an ancient Slavic goddess, protector of harvest and the territory, was known amongst scholars as “Slavia”. But how did our club adopt her name?

Since the 1848 revolution, Czech youths formed the Literary and Rhetoric Club and started to advocate for the rights of the Slavs, who constituted a significant ethnic minority in the Austro-Hungarian Empire. They claimed allegiance to a Czech patriotic writer, journalist, poet and politician Karel Havlíček Borovský the next year. The motto they placed as headers on their papers read “Our colours, red and white – my legacy, honesty and strength!” (Barva naše, červená a bílá – dědictví mé, poctivost a síla!)

These heraldic colours of Czech kings gradually gained the support of more and more enthusiastic students from Slavonia (today’s Croatia and Serbia) who came to Prague for their studies. The goddess of harvest and the territory was highly esteemed in Slavonia since the Roman Empire when the region was called Panonia and the local name of the goddess, Sláwa, was transcribed into Latin – as Slavia.

The territory occupied by the Slavs was huge and no other ethnic group managed to settle as large a space in Central and Southern Europe and Russia. The Czechs were delighted and proud to hear that all of this land was our land, Slavic land! Slavic settlers brought not only this pride but also many traditions (music, dress, customs), legends and myths. The pan-Slavic five-pointed star standing on the top became a symbol.

Over time, the Literary and Rhetoric Club renamed itself as Slavia and organized readings of patriotic works. The students form 1848 were active in looking for their successors and as early as 1880, we can find names and associated families that were later involved in establishing the sports club which started with cycling and gradually added other sports. The sports club adopted not only some of the rhetoric club rules but also the symbols: the red and white colours, the five-pointed star standing on the top.

A picture of the Goddess Slavia by a Czech Art Nouveau artist Alfons Mucha was depicted on the very first Czechoslovak 100 Crown banknote from 1919. We know that Mucha did not particularly research mythology and that it was Josephine Crane, a daughter of the first US Ambassador to Czechoslovakia, who stood as the model. However, it seems that there were no images of the goddess produced prior to Mucha’s work. Slavia had been only described previously and never depicted. 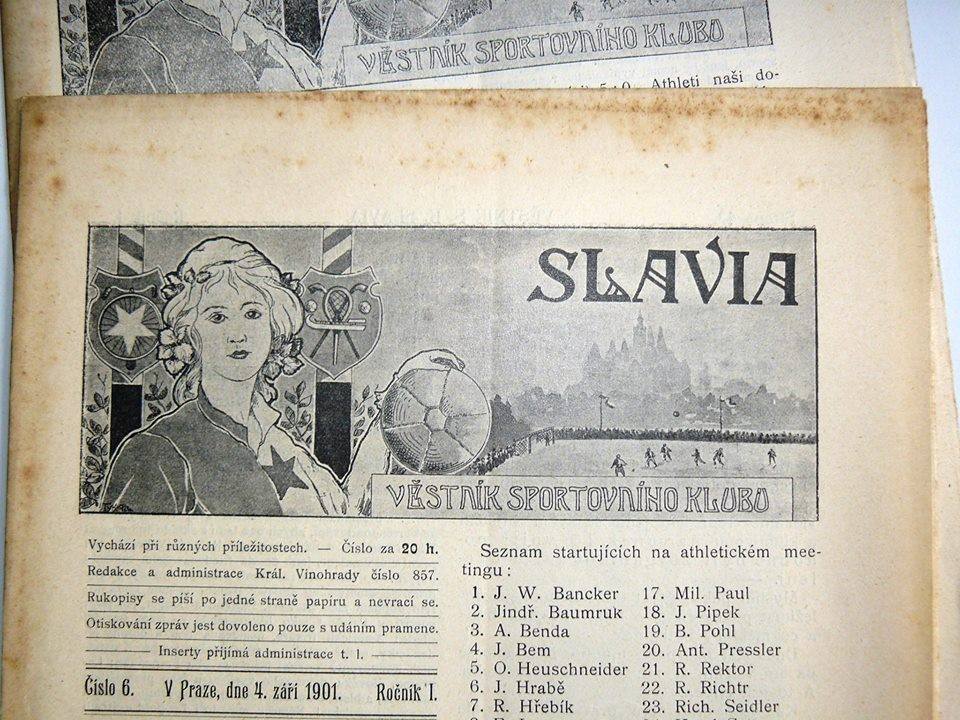 In 1901, the Art Nouveau artist Alfons Mucha put the Goddess Slavia into the header of the club bulletin. There is a bicycle wheel in the left coat of arms as a reminder of the sports origins of the club. The second coat of arms shows the sports that were added over time: bandy hockey, tennis and cricket. Finally, she holds a football ball.

Alfons Mucha originally painted the Goddess Slavia for a poster of the insurance company Slavia. The painting also appeared later on banknotes of the newly formed Czechoslovakia.

OATH AT THE FEET OF SLAVIA 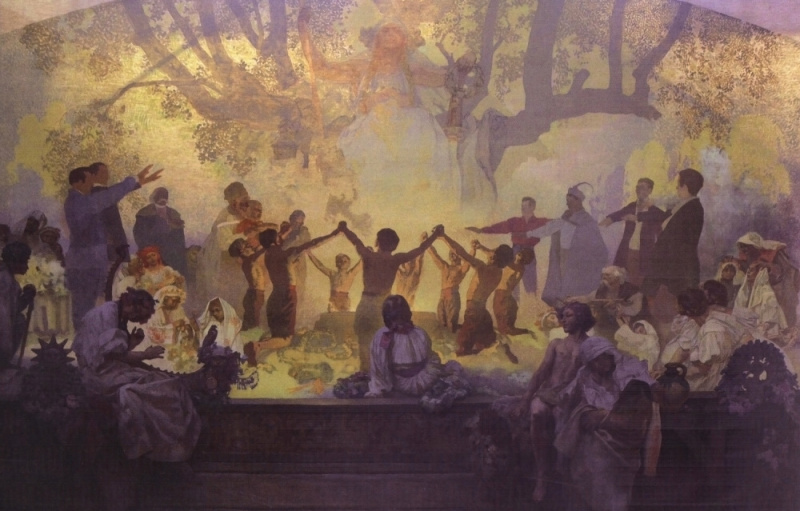 The Goddess Slavia also appeared in Mucha’s Art Nouveau masterpiece called The Slav Epic, namely in the painting “Youth take the Oath” (Přísaha omladiny) where the youth take a pledge of allegiance at a lime tree (the lime tree is considered to be the tree of the Slavs). “Omladina” does not only mean “the youth” in the Czech language. It was also a name of a patriotic group operating during the Austro-Hungarian Empire. This group was an association of young progressivists, many of which were also members of the Literary of Rhetoric Club Slavia, such as Alois Rašín who later became Minister of Finance of Czechoslovakia. 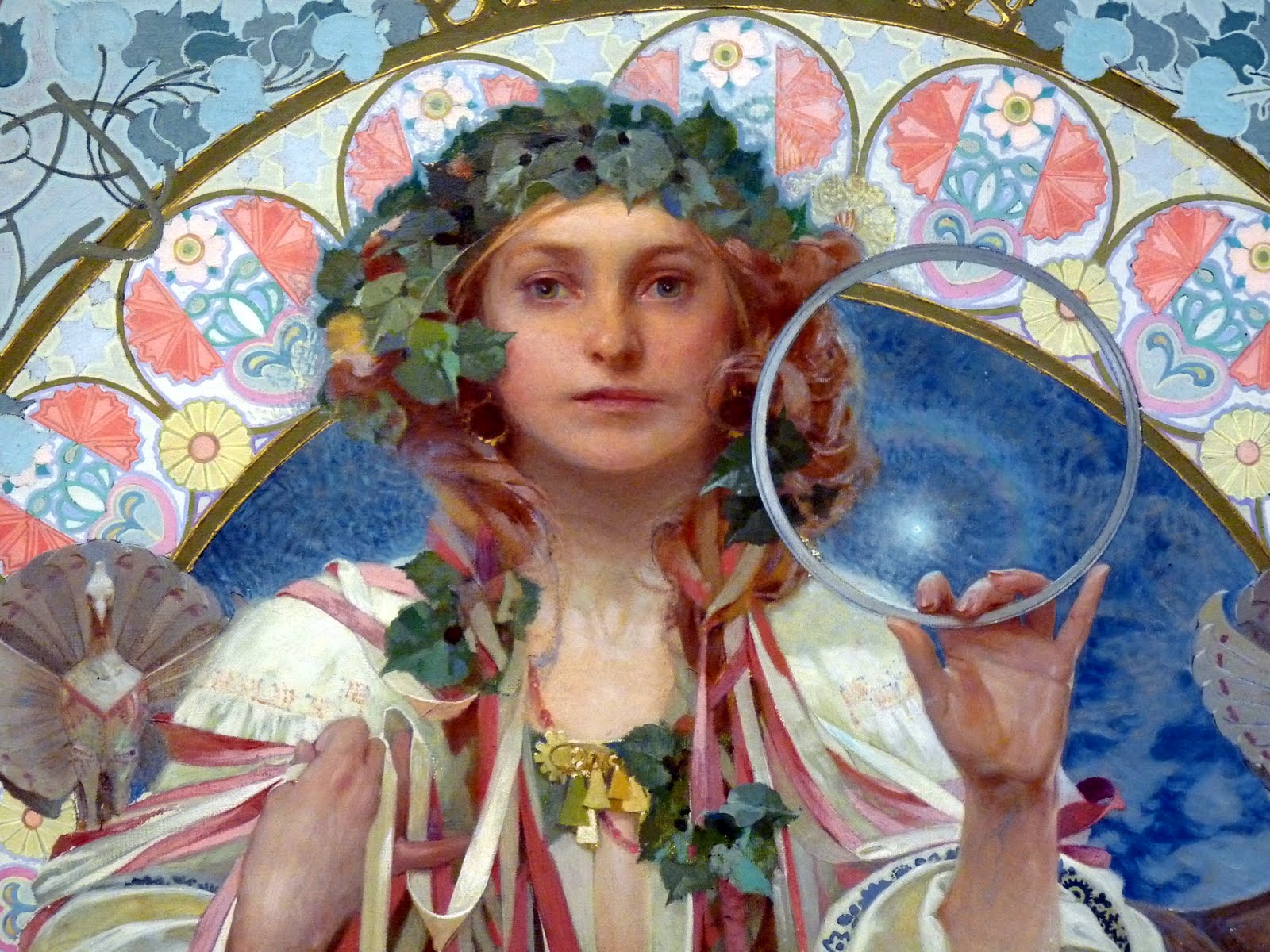 The portrait of Josephine Crane Bradley as the Goddess Slavia by Alfons Mucha.

IN THE BEGINNIG WAS THE BICYCLE

The first photo of Slavia founders from the newspaper Národní listy. The first chairman Jaroslav Hausmann in the middle. Photo: Slavia archive 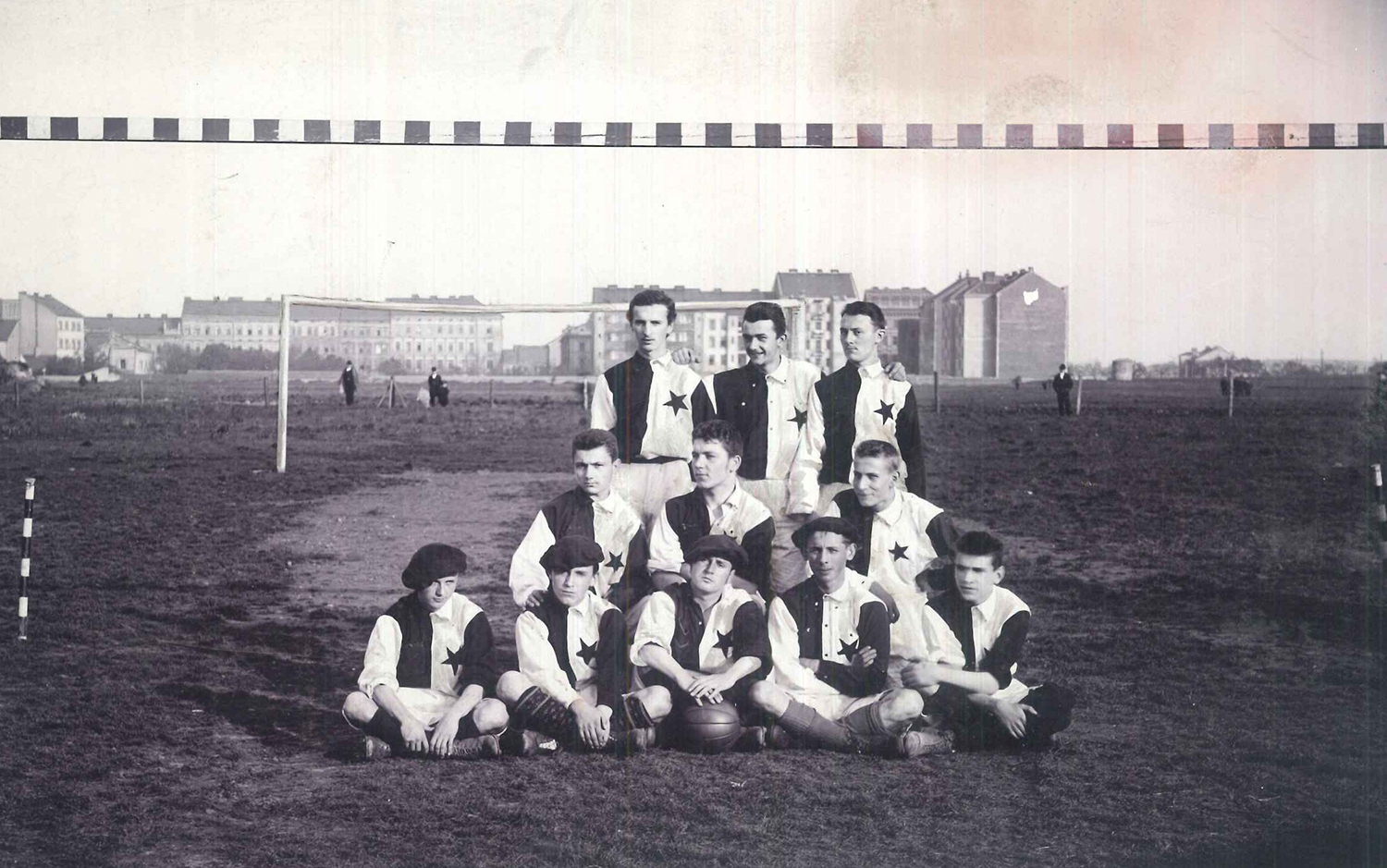 The oldest photo of Slavia from 1898. Back then, we still had to rent a place at Letná, ca 200 meters from the future stadium. First row from the top in the middle is the goalkeeper, the oldest one of seven Vosátka brothers, defenders Stöckel and Strádal stand next to him. The middle row from the left: midfielders Pressler, Hrabě, Krýž. The bottom row from the left: forwards Moučka, Setzer-Bloomer, the captain Freja, Kindl and Heuschneider (who later accepted a Czech surname of Hajský). Photo: Slavia archive 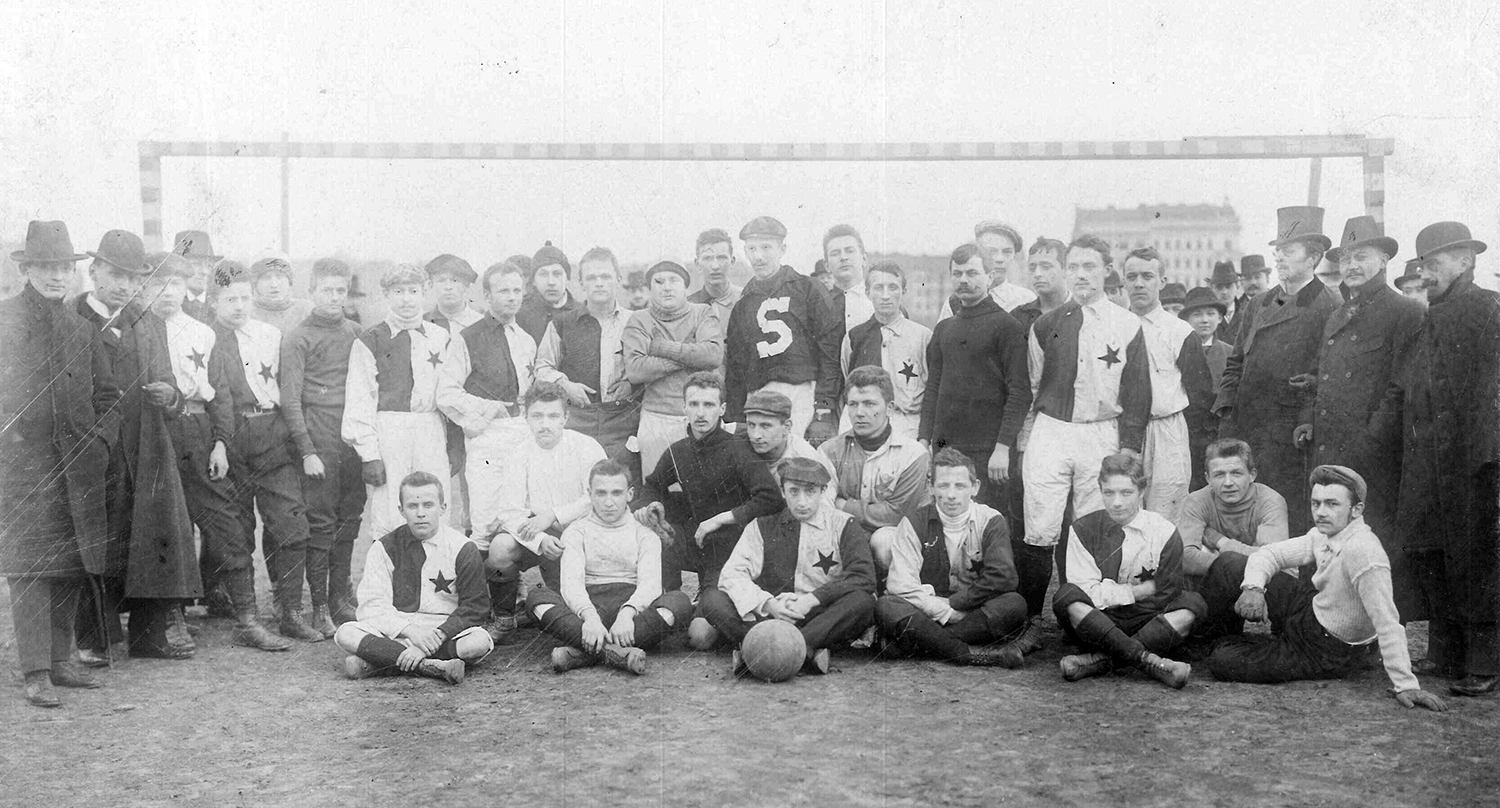 Slavia for the first time as the national team in 1899. Taking a Spartan goalkeeper Prokop on board for this occasion (black shirt with an “S” on the chest), Slavia played a game between Prague and Vienna (2:2). Both goals were scored by Setzer who also used the surname Bloomer as a tribute to the English football professional. 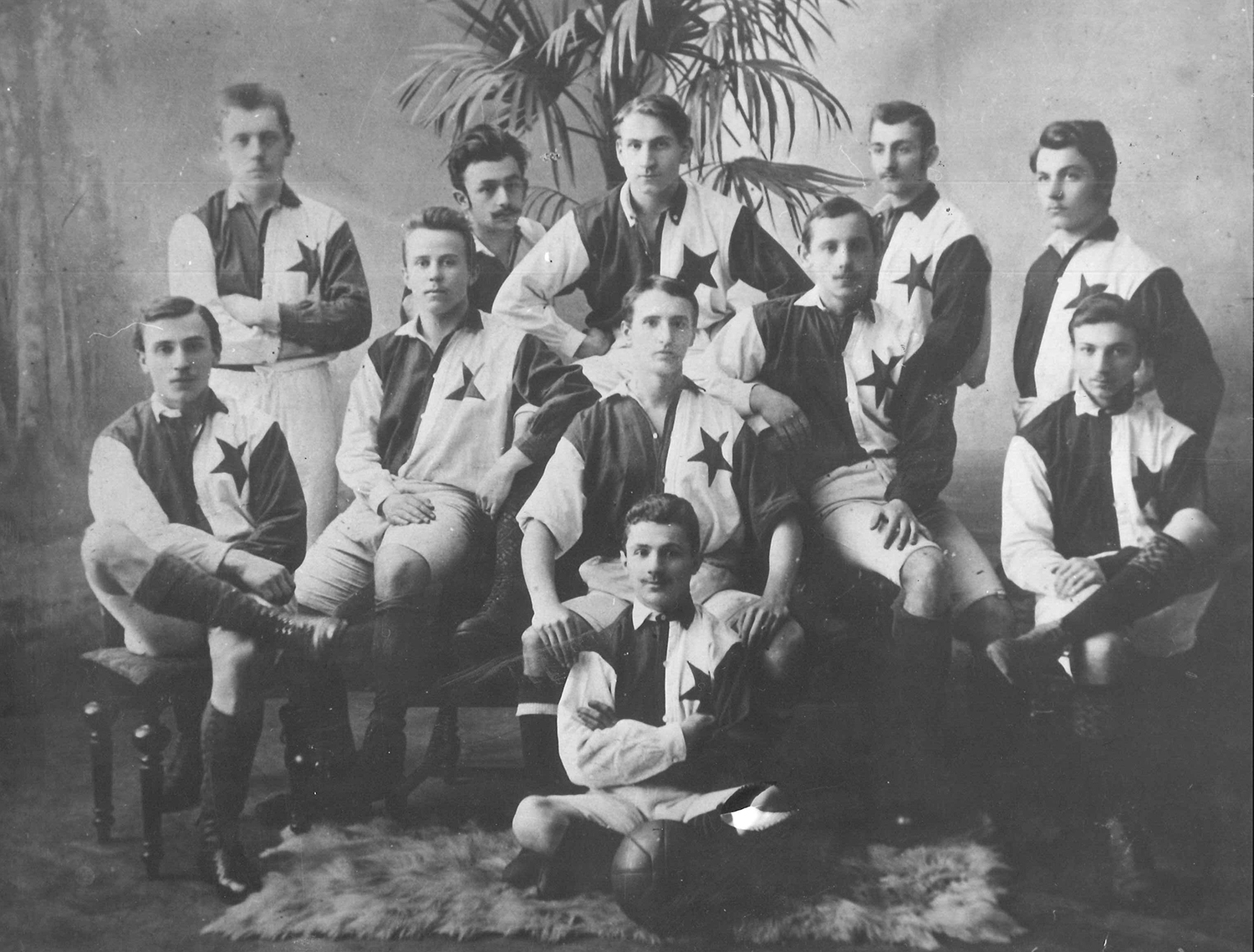 Opening of the new pitch with stands on 15 September 1901. The first game was a friendly with Allemanis Pforzheim which ended 15:2. Only a month later a former Slavia captain was elected the first official chairman of Czech football. Photo: Slavia archive 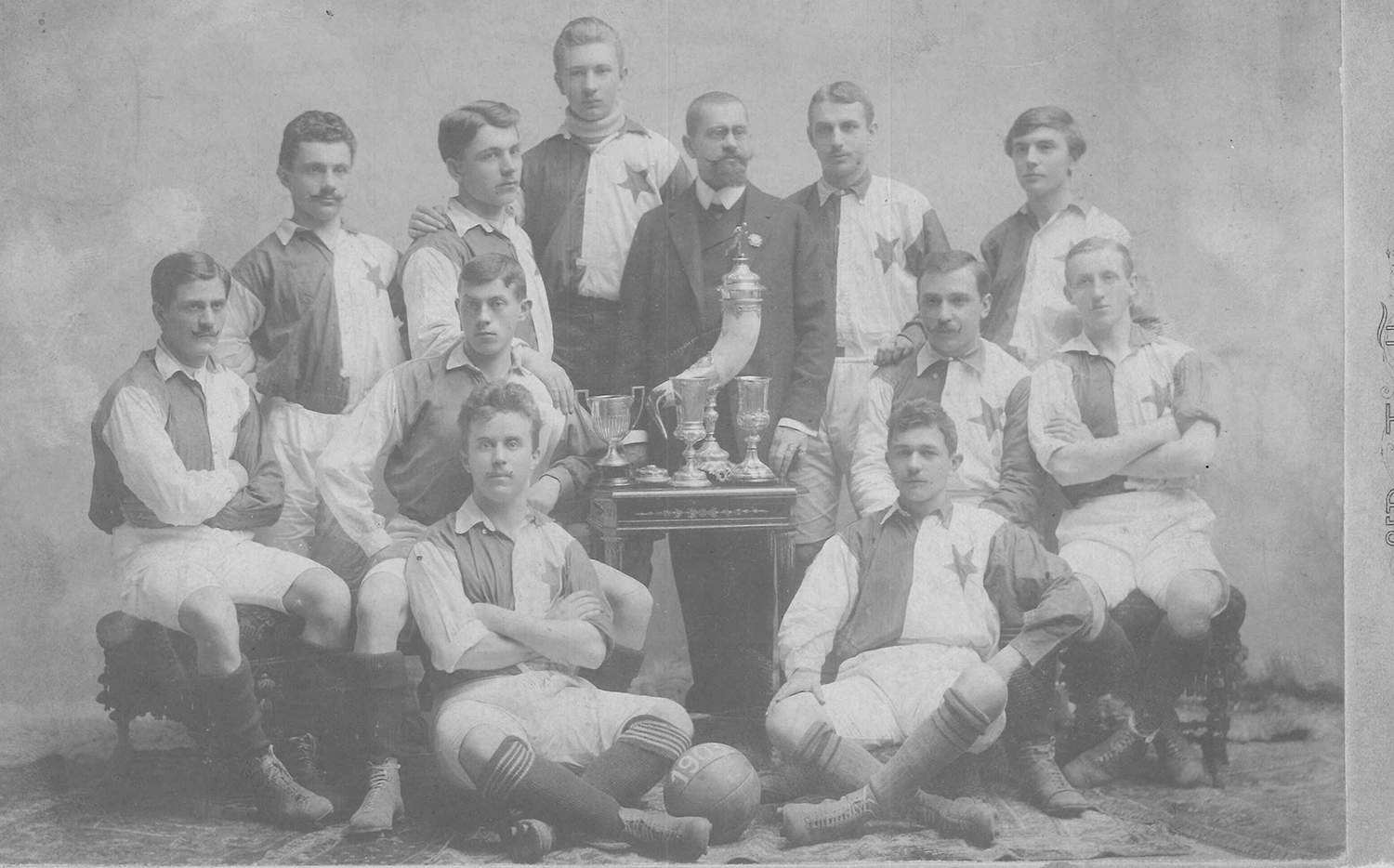 twitter
Congratulations to the first #UECL champions @OfficialASRoma 👏And congratulations to @Feyenoord for their fantastic European journey! We knew...
twitter
Happy birthday 🥳 to @VladiSmicer11! twitter.com/SlaviaMuseum/s…
twitter

ℹ️ | @boavistaoficial activated option for permanent transfer of 🇭🇷 Petar Musa and the Croatian striker will stay in...
twitter

✍️ @ibratraore27 will continue at Eden! Ivorian midfielder extended his contract with Red and Whites until 2024 with an option to become...
twitter